We were twenty-five souls who took arms against windy snow to join the Ashland Poetry Workshop for a weekend this past November 23-24. The schedule comprised four hours of workshop with highly accomplished poets, an open reading for participants, and readings by workshop leaders. Several OPA members were there, Patricia Black, Jennifer Hambrick, Sharon Mooney, Deb Strozier, and Laura Weldon, among them.

The leaders were Deborah Fleming, Steven Haven, and Sarah Wells from Ashland University and Robin Davidson of the University of Houston.

For two hours Saturday morning and two the next, Steven Haven, director of the MFA program at Ashland, led six of us in workshop. He had obviously read the poems carefully, and he encouraged plenty of discussion.

About the other leaders, I heard few, if any, mutters of discontent. A single hitch: one leader, who thought the Saturday workshops would continue after lunch, didn't start to entertain participants' poems until the morning session was nearly over.

We heard plenty of strong poetry in the afternoon. I especially enjoyed hearing finished poems on themes we had heard in the morning's session. However, I strongly recommend a smaller, more intimate room.

Saturday evening and Sunday afternoon, each workshop leader read his/her own poetry. I most enjoyed Robin Davidson's translations, written collaboratively with the Polish poet Ewa Lipska; likewise, poems on a year-long absence from her husband. (In "April Storm" she writes, "to feel in the pulse of rain pelting the window/your fingers of weeks, months ago/still tangled in my hair.)

Sarah Wells writes lean meditations on marriage, family, and religion. Much of Deborah Fleming's work is in specific forms--—stanzas alternating between quatrains and couplets, for instance. Of Stephen Haven's poems, I most enjoyed his last, based on a late nineteenth pastoral painting (whose title and painter I forget).

One criticism: too much open time. I suggest a community lunch or dinner. Also, participants might lead our own informal discussions: on drafts we start from prompts set by morning leaders, for instance; or on specific poems by our leaders; or on poems by canonical or experimental poets--what if everyone were to come ready to talk about "Because I could not stop for Death"?

The weekend was free, with a recommended donation of only $20. This was greatly appreciated; I would gladly pay more for a fuller schedule, however.

I think most OPA members would enjoy the Workshop. Could the weekend be even more satisfying? Yes, I believe so.

The September 21 OPA event featuring Bruce Weigl was another great afternoon of poetry and writing. Weigl, who has twice been nominated for the Pulitzer Prize, treated the audience to a terrific reading from two of his most recent books, followed by a writing exercise that stressed the importance of using the imagination—especially when writing about the familiar.

The poet’s working-class background is prominent in his work, though Weigl referred to it as a blessing and a curse. But he strongly believes in poetry reaching the wider public through organizations such as OPA. He drew the analogy to Europe and other parts of the world where writing organizations are prominent and often revered.

One of the interesting things Weigl mentioned during the afternoon was that his latest book, The Abundance of Nothing (Triquarterly Books, 2012), took eight years to write. After Declension in the Village of Chung Luong (Ausable Press, 2006), Weigl felt he had said everything he had to say as a poet. But he kept writing poems and the manuscript went through, in his words, “a hundred iterations.” In fact, he mentioned that just before sending the manuscript off to the publisher, he gave it one more read and cut another eleven poems because he had just the slightest doubt about them. The hard work paid off, as Abundance was nominated for the Pulitzer.

Weigl’s approach is like that of a mathematician. “I like to sit down and try to solve the problem of a poem,” he said. For example, he asks why might a poem be meaningful to a reader or what is the appropriate form for the poem. The Abundance of Nothing features many unrhymed sonnets and other forms because Weigl “needed the form to hold the immensity of the subject of the book.”

He also stressed the challenges of putting together a manuscript. As Weigl noted, last lines are key as they should somehow link to the next poem. First and last poems are also critical to a book. The first poem, according to Weigl, should be like a map for the rest of the book, “almost like a thesis.” The last poem should also be thoroughly considered and the poet should ask: Where do I want to leave my reader?


Finally, Weigl addressed a question about distinguishing between good writing and “crap.” He noted that he doesn’t see such things as successes and failures. “The crap is what you don’t write,” he said. In his view, the sheer act of writing about something indicates that it is important to you in some way. The trick—the problem—is elementary: figuring out how it is also important to the reader.
by Chuck Salmons
OPA Vice President
Posted by Chuck at 7:28 PM No comments: 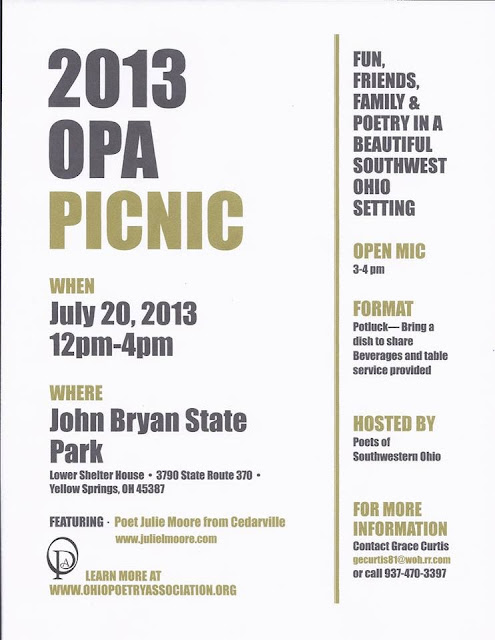 Posted by John B. Burroughs at 9:47 AM No comments:

Hocking Hills Festival of Poetry
Presented by The Power of Poetry

“I have laid aside business, and gone a’fishing.”
(Izaac Walton, The Compleat Angler, ca. 1650)

Alan Cohen, who says he is “the planner, cook, schlepper, dish washer, talent agent, etc.,” estimated that the Festival—whose theme, “Songs of the Other World”—brought together some 140 poets and friends from as far as and .

Special guests were poets Naomi Shibab Nye and Rosemerry Wahtola Trommer and storyteller Will Hornyak, who read or performed from their work each evening. More on them below.

First, we heard music, performed by pianist Evie Adelman and flutist Gert Young, of Bach, Schumann, and others. (There was an occasional flat note.) Laz Slovits played guitar and sang versions of Shihab Nye’s poems that he put to music; one he played on the pennywhistle.

Three guests were teenagers, one who said poetry helped him overcome a stutter. Two recited poems from the NEA’s Poetry Out Loud competition; another, from Alan’s group, Wellspring of Imagination, read one of her own.

Each evening, Alan read his own thoughtful essay on the power of poetry. We also heard Kari Peterson read her poem, “Serving,” which won the festival’s poetry contest.

First, why a storyteller? Immediately I realized that Will Hornyak, like poets, celebrates language. Friday he began amusingly with the Irish saying, “A writer is a failed conversationalist.” Most of his folktales—about Death at an old woman’s birthday party, for instance—were Irish, in perfect brogue. Saturday, he told a Nez-Pers creation story and a hilarious story about frustrated young widows, nuns, and penises.

Saturday morning, he led a storytellers’ workshop. I didn’t attend, but I heard plenty of laughter from the back of the lodge.
Both nights Naomi and Rosemerry read their poetry, each with warmth, humor and grace; Rosemerry sang some of her stanzas. The ghost of William Stafford breathed through poems by both poets. Also, Naomi often spoke of Ted Kooser, and Rosemerry of Rumi.

Naomi’s poems thread metaphor with time and place; many draw from her Arabic heritage (see “My Father and the Fig Tree,” in Tender Spot, for instance). Rosemerry’s poems (such as “Epistemology” in The Less I Hold) are very imaginative and sophisticated streams of metaphor. A few of her poems, however, struck me as a smidgeon too cute.

Saturday morning, Naomi and Rosemerry presented a workshop for poets. Their prompts were deceptively simple—write poems combining short lists: what you don’t know, what you’re grateful for, etc.

It was all a great success. Other than small complaints about the website and the anthology, Follow the Thread, I have only one substantive suggestion: Hold at least one event on Saturday afternoon. How about several small circles for open readings? Or for discussion of selected poems, say, from , Kooser, or Rumi?

Come to the Hocking Hills Festival of Poetry next year. But bring a soft cushion; you'll be sorry if you don't.

- Craig McVay, Columbus
Posted by Chuck at 7:58 PM No comments:


As some of my fellow poets and friends know, I was fortunate enough to take part in a 5-day workshop with Sharon Olds back in 2005 at the Esalen Institute, a beautiful retreat atop a seaside cliff of northern California in Big Sur country. While one of my fondest memories of that experience is of falling asleep each night with the sound of the Pacific crashing against the rocks at the base of the cliff outside, I also will never forget the amazing workshops with Sharon. She, like her poetry, is honest, introspective, and relentless in tackling her demons—both internal and external. For those of us who love her poetry, this may be the biggest reason why.


The Esalen workshops taught me a lot about my own work, such as how to take chances in my poems, and so again did the evening this past Thursday at Columbus College of Art and Design (CCAD), where Sharon gave a wonderful reading, sandwiching a “conversation” period between two segments of poetry. Walking away from the auditorium—which was packed, by the way—I reflected on some of the notes I’d taken and share them here.


During the first set of poems, she read a gripping piece that tackled the horrific act of the rape (and I suspect murder) of a young girl by a man. After the poem ended, there was an overwhelming silence in the auditorium, and for a few seconds you could tell the audience was in a bit of shock, tension filled the room as we reeled a bit from Ms. Olds’ forthright yet masterful treatment of the subject. There was a pause, as reader and audience stayed silent for a few moments. Then little joke, like a good reader or performer would do, she made a little joke—nothing over the top—and that tension was eased. The small laughs from the audience acted as a reset button, so that she could move on to the next poem without her peers being too distracted by this gripping poem.


At one point during the “middle act,” Sharon answered questions from the audience and addressed one about her process—a question that seems to be mandatory for any featured poet, along with questions about one’s poetic influence(s) and who he/she is currently reading. Her answer included an explanation that she writes all poems by hand—as do I—in the pages of wide-ruled, spiral-bound notebooks using a plain ballpoint pen. But she also described her revising process, noting: “I take away half the adjectives and one-third of the self-pity,” a remark that drew considerable laughter.


For the most part, I would describe Sharon Olds as a very good reader/performer, primarily because she’s open, honest, and uses humor very well, which I think is a key for any featured poet. Nonetheless, I was a bit distracted by the way she periodically checked her wrist watch. Don’t get me wrong, a good reader should have an eye on the clock and keep to the schedule. But it shouldn’t be so obvious. She could have taken her watch off and set it on the podium, giving it an occasional glance. If there was any flaw to her performance, that would be it. Otherwise, she held the audience in the palm of her hand.