by Stephanie Harrell and Andrew Christ

On September 18, the Forest Haiku Walk opened as part of the Holmes County Open Air Art Museum (OAAM) in Millersburg, OH. The OAAM is the vision of Jason Nies, the owner of The Inn at Honey Run. The Haiku path is the vision of Julie Warther, the Midwest Region regional coordinator for the Haiku Society of America (HSA). The two worked together to create this first installment of the OAAM, which is on the Inn’s property.

Ms. Warther invited members of the Midwest Region of the HSA to write haiku reflecting each season, keeping in mind the ultimate setting of the path. Along the path, thirty haiku reflect nature, including frogs, clouds, mushrooms, leaves, streams, snow, rain, the sun, moon, and stars, and more. In the bucolic setting of Holmes County, visitors can enjoy poetry perfectly aligned with the surroundings. Each haiku elicits a sensory image that guests can connect with.

waiting for you
I find a turtle
in the clouds

As visitors walk the mulched path, they will find benches for rest and reflection, as well as for observing the surroundings. In addition to mental images conjured by the haiku, one may see (depending on the season) red, black, and gray squirrels, chipmunks, deer, a variety of birds (including wild turkeys) and insects, and perhaps even one of the cats that live at the Inn.

Creating the walk connected local skills with the Japanese theme.  Tubar Eureka Industrial Group in Sugarcreek, OH, inscribed the haiku on steel plaques shaped like ginkgo leaves and then attached the plaques to stones from farms near the Inn. The haiku are in English as well as in the romanized Japanese transliteration and the Japanese translation. The stones are placed along the 1.4 mile path at various intervals. The spacing is designed to give the visitor time to absorb and reflect on each poem. The Walk winds through the forest on a hillside, along part of the prairie at the top of the hill, and down toward the creek that parallels County Road 203.

The path is not handicap accessible, and due to the rise and fall of the terrain, moderate exertion is required to walk the path. The Forest Haiku Walk/OAAM, as well as all trails on the Inn’s property, is open to the public and is free.

A video by Jason Nies and The Inn at Honey Run describes the OAAM and Haiku Walk. A Tuscarawas County article provides additional details from Ms. Warther. The Columbus Dispatch also ran a recent travel article about the new path. The HSA plans to publish a book that includes the haiku from the path. For more information about the Forest Haiku Walk and the Holmes County Open Air Art Museum, contact The Inn at Honey Run: Amish Country 6920 County Road 203, Millersburg, Ohio 44654-9018; phone, 1-800-468-6639; e-mail, info@innathoneyrun.com.
Posted by Grace Curtis at 6:00 PM 1 comment:

In the spring and fall, Ohio Poetry Association sponsors a poetry retreat at Malabar Farm, in Lucas, Ohio. Participants stay at the hostel on the property, a wonderful old farm house managed by OPA member, Mark Sebastian Jordan. The retreats are now in their fifth year. It’s a time of writing, reflection in a peaceful pastoral setting, and reconnecting with other OPA members who share a passion for poetry. During each retreat a workshop leader directs the group in Friday evening and Saturday morning sessions on a specific topic with prompts. Individuals who want to, read their drafts and ideas. The group enjoys an evening potluck meal together and a scrumptious breakfast prepared by OPA Treasurer, Rinda Sansom in the large farm house kitchen. After the evening session, many gather in the basement living area to share poems in a round-robin fashion that can go late into the night. It’s nothing short of 18-20 hours of artistic bliss with poetry comrades in an idyllic setting.

This past September 12-13, Dayton-area poet, David Garrison, led the fall session which focused on writing about people. He shared the following poems as models: “The purpose of poetry” by Jared Carter, “Long Division” by David Lee Garrison, “The Farm Wife’s Vacation” by Janet Ladrach, and “Milk” by Diane Gilliam Fisher.

The group discussed each poem and talked about such things as writing about people we know, how to bring the person into sharp focus, and more. Many created early drafts of poems about family members and people they’ve encountered throughout life. There was a lively discussion about poem endings.

Many individuals have been coming to the event for several years. Participant, Robin Mullet, indicated that often the seed of an idea starts at the retreat and it germinates, sometimes as early as during the ride home. It may not blossom for several weeks, but it’s clear the retreat is a place to generate new material. This sentiment was share by many. Some poems have ended up in the OPA anthologies and in Common Threads, the OPA annual collection, and in other journals.

This year, several members came on Friday evening—an option that is open to everyone who
registers—and were treated to work by a Welsh poet, J. Tudor Davies, who had been staying at the hostel. According to OPA member, Janet Ladrach, he told the group he had won a major Welsh competition "Eisteddfod" in which the winner is given a throne at an elaborate ceremony called: "chairing the bard." The required form for the poem is a complex metered, internal rhymed form of poetry called "cynghanedd."

Before he and his wife, Barbara, left on Saturday morning, Tudor gave a reading of his poem, "Mountain Lake," about the mining disaster in Aberfan, Wales, in 1966. In an impromptu lesson, he showed the group  four lines of poetry in Welsh, highlighting the rhyme and the accent. Of this experience, Janet says, “This is one of the benefits of being part of OPA. If I weren’t a member, I wouldn't have known about the retreat, and I wouldn't have had this wonderful time with a Welsh poet set down among us in mid-Ohio.”

Additional pictures from the weekend 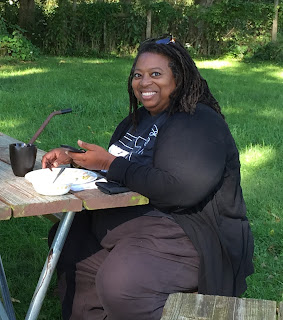 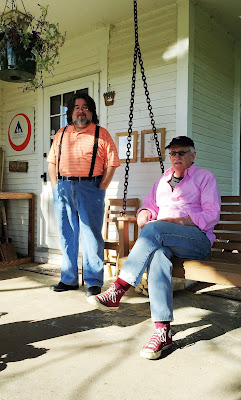 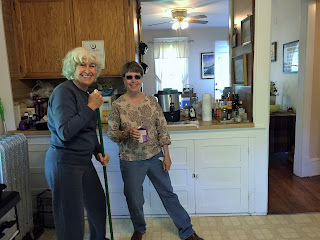 Posted by Grace Curtis at 11:15 PM No comments:

Join OPA for a Reading to Honor Ohio's Native Peoples

“Voices from the Past”
An Afternoon of Poetry and Drums

Kimberlee Medicine Horn Jackson, Yankton Sioux, examines the fading boundary between Native and non-native and questions whether to re-enforce the lines between two worlds or smudge the great divide where peaceful relationships can be restored. She is an adjunct English instructor at Kent State University, Geauga Campus.

Mark Hersman is a poet and archaeologist. He reads his poetry across Ohio and has hosted/emceed poetry venues throughout the state. He is currently excavating an ancient village site near Newcomerstown, Ohio. His chapbook Unearthed was released in 2009.

Connie Willett Everett has bones in southern Ohio Shawnee tribal country. Her poetry blends natural and social justice themes. She is editor/publisher of Pudding Magazine and is one of the hosts at the Poetry Forum in Columbus, Ohio.

Dr. Carmel L. Morse has written a collection of poems about her female relatives and ancestors called Bloodroot, and she is currently working on a memoir about growing up in a dysfunctional home in the 1960s. She is an assistant professor of English at the University of Northwestern Ohio.

Rikki Santer is an award-winning poet whose first poetry collection, Front Nine: A Biography of Place, explored the many voices and layers of history that have informed the sites of the Hopewell earthworks of Newark, Ohio.

Chuck Salmons, a native Columbus resident, is the current President of the Ohio Poetry Association. His poems have appeared in several journals and anthologies, and he regularly gives readings throughout the state of Ohio.

Steve Abbott is a Columbus poet, editor, and founding member of The Poetry Forum. He represents Ohio Poetry Association on the selection committee for Ohio’s first Poet Laureate.

Jack Burgess is a retired teacher, activist, columnist and poet. He writes about history, social justice, and war & peace. His chapbook, It’s Always Gettysburg, was published by Pudding House.

Susan Sheppard, founder of the Sacred Way Poets of Parkersburg, W.V., is of Lenni-Lenape, Shawnee and Saponi heritage. Her poetry has appeared in a number of poetry zines, anthologies and journals.

Kerry Trautman is a lifelong Ohioan. Her poetry and short fiction reflect a deeply-rooted connection to the culture and landscape of her Midwestern home. She reads her poetry at multiple venues throughout the state.

Kari Gunter-Seymour is a fine art photographer, graphic designer and poet, whose people come from the foothills of the Appalachians and the mountains of Tennessee, storytellers all. She is the founder/curator of the Women of Appalachia Project.

Suggested Arrival Time 11:30
Artists will be selling their books and CDs

About Arc of Appalachia

The Arc of Appalachia Preserve System is a non-profit grassroots organization dedicated to expanding preserve land. Every year, money is raised to purchase land, saving it from development. The ARC manages a dozen nature preserve sites and four ancient American Indian earthwork sites in southern Ohio, including Serpent Mound and nearby Fort Hill. Learn more at www.arcofappalachia.org.

All the proceeds from Serpent Mound go to the park’s upkeep and education programs. Anything left over after that goes to expanding preserve areas for nature and ancient sacred sites in Ohio.
Posted by Chuck at 9:46 PM No comments: