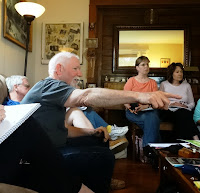 "Ten: Watership Down by Richard Adams. Written in the tradition of the Old World beast fable, Adams writes an inspiring story of a band of rabbits seeking to establish a utopian society; the interweaving of rabbit myth with the struggle to survive makes for a timeless story."
Posted by Chuck at 9:19 PM